Showing posts from February 2, 2014
Show all 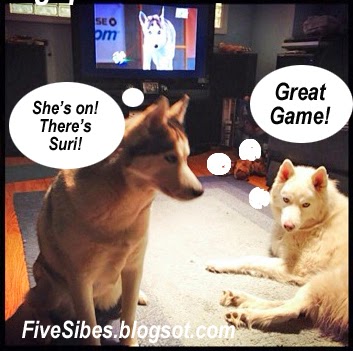 Bandit and Wolf were excited to see Suri on the TV! We had a fun day here just relaxing and watching the Animal Planet's Puppy Bowl X ...but what made it extra special was that a very special little furfriend - a Siberian Husky puppy named "Suri" (check out her Little Miss Suri Facebook page and be sure to tell her the FiveSibes sent you over!)  Little Miss Suri's professional Puppy Bowl X portrait! Suri traveled all the way from Iowa to New York City to audition and not only was she selected, she was in the starting lineup! It was all very exciting! She was also featured on Fox News , along with her daddy photographer Carl Bromberg, who volunteers at the Last Hope Animal Rescue in Iowa. Click HERE for the link to the news broadcast where they talk about "viewing parties" that were hosted in order to raise donations for rescue dogs. The Puppy Bowl also shines the light on puppies and dogs who need homes and looking to be adopted into foreve
3 comments
Read more
More posts