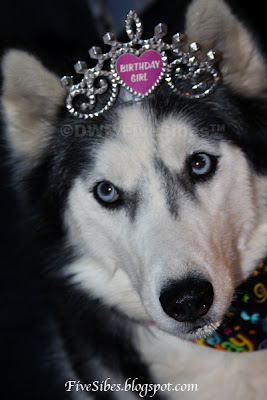 Today is a very special day here in our FiveSibes™ home...it's our Harley's 8th Birthday - the leader of our pack! Woo! It's so hard to believe that it was eight years ago today we brought the tiny little eight-week old pup with the intense mask and bright blue eyes home! This beautiful sassy little pup - who captured my daughter's heart immediately (ours too) -  grew into a beautiful, super smart, and still sassy adult, and is credited with being the first, and future leader, of the FiveSibes! After Harley became part of our family, we definitely came down with the Siberian Husky Potato Chip Syndrome! At the time, we had a then 13-year-old rescued Akita/German Shepherd, Chelsey, who we had since a pup, and she was sadly starting to get Canine Alzheimer's and arthritis, and pup Harley was just too rambunctious and rough for her, so Hu-Dad suggested getting Harley a play mate...and that's when Gibson joined our family and he has had a mad crush on Harley sinc
18 comments
Read more
More posts