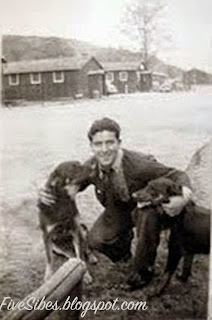 T/Sgt. Wills with two K9 buddies. Today, we are taking trip down Memory Lane to an important time in our American history. Seventy years ago today - May 8, 1945, was VE Day, Victory in Europe Day, signaling the nearing end of World War II. My dad served in the United States Army from 1939 until the end of World War II in 1945. He served two tours in the European Theater - one from 1942 until 1943 with the renowned "Big Red One" 1st Division, and then a second time he went back with the men he trained in the 16th Infantry's Rainbow Division, both times in a medical detachment. Ironically, May 8th is also the day my Dad earned his wings and journeyed to Heaven...in 1974, just one year shy of 30 years after he was one of our nation's "greatest generation" heroes. My Dad was a great lover of animals, dogs and horses in particular. Even on base, he canine buddies! In 1995, I was part of our city's WWII Commemorative Anniversary Committee and worked
4 comments
Read more
More posts