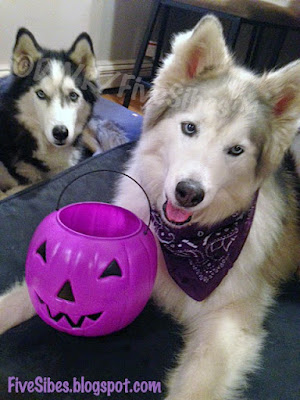 Gibson has a purple pumpkin this Halloween! Pretty cool, right? Do you know he has a purple one and not an orange one? Harley has a hint: Purple is the color of...? Epilepsy Awareness. The Purple Pumpkin Project® was founded by founder Ron Lamontagne, whose son was diagnosed with Epilepsy when he was just four. Ron was brainstorming ideas on how to spread awareness about Epilepsy and was inspired by a local pumpkin patch! He thought that while kids and families were carving pumpkins, they could also paint/decorate/make a purple pumpkin that would then prompt folks to ask the question "Why is your pumpkin purple?" to which the replies would be information on Epilepsy - human and canine.  As many of  you know, the cause is near and dear to my heart as one of my Siberian Huskies, Gibson, is an Epi-dog (canine epileptic) and was diagnosed with idiopathic Canine Epilepsy in 2009, shortly after his third birthday. It was a very scary time and I felt very alone. Ever
8 comments
Read more
More posts