Of Injuries, Rehab, and Healing of Huskies 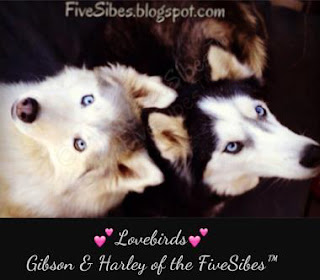 Love is...sharing rehab together! 'Tis the season for rehabbing Huskies here...I haven't done an update in quite some time, so I thought I'd bring everyone up to speed on what's happening here. As you recall, Chloe, who was just four years old, had double bilateral cruciate imbrication surgery last summer. She, I am happy to report, is progressing nicely! Where she had no ability to stand or walk after collapsing from a simple jump up on the bed only to discover she had shredded both hind CCLs and mensiscuses (deemed most likely from a genetic problem as she was from an irresponsible breeder). While there is a hitch to her gait now, she now can jump up on furniture, counter surf (which we discourage, however, seeing her stand up on the counter for the first time in almost a year was just wonderful! So I reached for my camera to capture it!), run with her with siblings, and even kick up dirt with her hind legs! Oh happy days! Gibson also tore his CCL while pla
7 comments
Read more
More posts