Gibson Does the "Nae Nae" Dance on a Fond and Fun Flashback Friday! 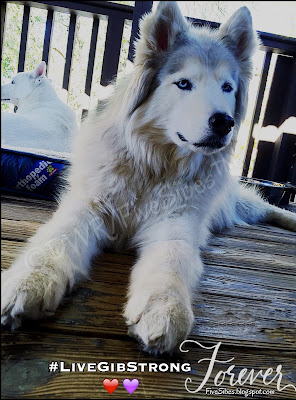 I miss those big polar bear paws. Gibson was not only an amazing boy and Epi-warrior, he was quite the character! There are so many things I miss about him, and even with four other Huskies, his presence is greatly missed. I feel as though he is just out in the backyard, lounging on the deck until I call him in. And to hear so many of you tell me you miss seeing him, too, well, it just warms my heart to know of how many lives he touched. Since I'm a shutterbug by trade, suffice it to say I have a lifetime of photos of my FiveSibes, so Gibson will be popping in every now and again to share a memory and a smile with us all. Gibson was a very special boy. He was so in tune with me. He listened. He understood. He responded. I sorely miss our two-way conversations, his understanding, and his playfulness. He was just so much fun to be around. And when he was feeling good, he felt goooood! And on those days I was even more prouder of him, if that's even possible, because I was a
24 comments
Read more
More posts