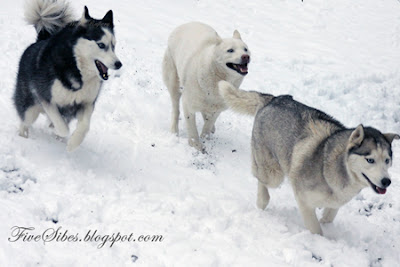 There's excitement in the air today as the 2012 Iditarod kicks off! It was as if our kids sensed it in the air...they ran their own race all around our yard kicking up snow (and dirt) zooming left, zooming right, jumping over each other in a great practice play for the great race! In our version, Harley would be our lead dog, challenged (and in the lead for this lap) closely by our alpha wanna-be, Bandit. And wherever Bandit is, Chloe is close behind! Wolf and Gibson were running their own race on the other side of the yard, pausing to jump up and knock snow off the tree branches, stopping to get a good nose full of the fluffy white stuff, before joining the other three in their energetic snow games! I think they were just so excited to have some significant snowfall...even if it is, sadly, starting to melt. If you are a fan of the Iditarod, there's some interesting places to check out and follow what's happening. For starters, there is the Iditarod: Last Great Race on Ear
11 comments
Read more
More posts