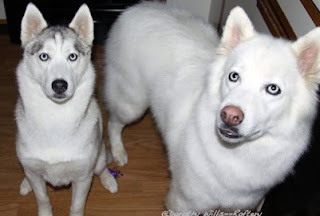 Our wonderful groomer came to the house yesterday to beautify two more of the FiveSibes. What a great job he did, as usual! My baby boy finally looks like his moniker - White Wolf - now he truly is white! However, he did not really like being in the tub...alot of scuttling sounded from there as he tried to make his escape! But alas, in the end, he realized all the fuss was just adding to his handsomeness, and ever since he and his sister Bandit were shampooed, groomed, and de-shedded, they have been strutting around knowing full-well just how beautiful they look! Now, it just can't rain or my white baby and his trusty mud-puddle lovin' sidekick sister will be Muddy Monsters once again!!!
8 comments
Read more
More posts