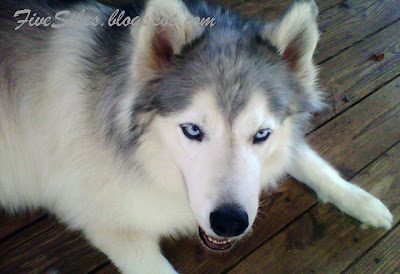 Gibson woooing his birthday and anniversary wishes! The past two days have been special ones here for the FiveSibe's hu-parents. Yesterday was my birthday and today is my husband's and my 30th wedding anniversary! We've received tons of Husky hugs and Sibe kisses from the furkids! Now, there is so much news to share and catch up on today!  I have to share???? First, we had entered a giveaway over at All Things Dog Blog and won! Wow, it was a box of treats that arrived in the mail for the the FiveSibes, who had a blast checking it all out!   The three pupsters had lots of fun sniffing out the goods, curious as to what could be in the box! Gibson even got a turn at sniffing the evidence. Wooooo! It's a whole box of   goodies that made their day! They had a blast playing tug-o-war with the rope twist toy and couldn't get enough of the tasty Cesar softie treats!  The surprise package sure made the FiveSibes' day! Many thanks to A
20 comments
Read more
More posts