Flashback Friday #32: Those Were the Days, My Friend ~ When Gibson Was Smaller Than Harley! 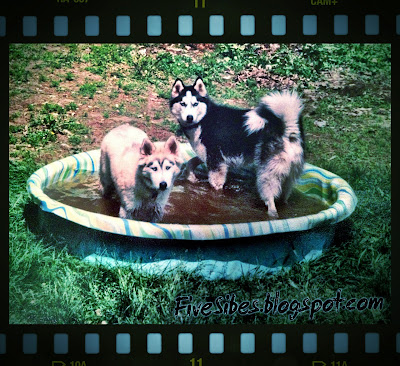 While flipping through puppy pictures for today's Flashback Friday, it was fun to come across some I have not seen in a long time (since they were film photos and not digital)...like this photo! I had to laugh, first at Harley's expression of knowing she was the boss over the new puppy, Gibson! Even though she loved every second of bossing him around, playing Husky tag, and rolling and romping in the grass and pool with him. The second thing I giggled at was how little he was! Gibson was a big puppy, here he was about six months old...and he didn't stay small for long! It was pretty soon after my wooly boy caught up to Harley in size, and then passed her...by almost double the size! And then...I noticed the crystal clear water (not!) Harley and Gibson had just played in the yard and dug holes and ran in and out of the pool, creating a muddy masterpiece! Even all our grass had not quite grown in yet after we installed a new "Husky-proof" fence, but just gave the
4 comments
Read more
More posts