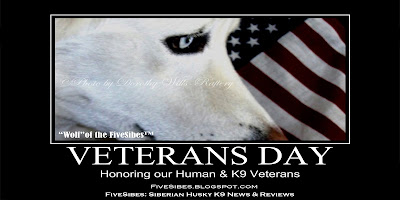 Veterans Day: A Thank You in Pictures  70th Anniversary of  the End of WWII   How It All Began in Our Family... My all-time favorite photo of my parents at Fort Jay, Governor's Island, NY, circa 1941. My dad was in the U.S. Army's 1st Division ( "Big Red One"), and then a second tour with the R ainbow Division .   My parents on their wedding day December 27, 1941  My Dad with a pup he rescued while serving. My Dad helping to feed the pup milk.  My Mom joined in the war effort on the homefront and became a "Rosie the Riveter" working as a lathe operator on cannon reamers in the Watervliet Arsenal, New York . Wolf with my article published in a newspaper from 20 years ago celebrating the 50th Anniversary of the end of WWII. You can see my parents' photo on the right, and my good friend, the late Dick Williams, on the left. Mr. Williams and I served on our city's WWII 50th Commemorative Committee, whe
7 comments
Read more
More posts