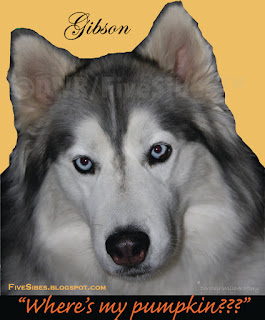 Back in the mid-80s, Clara Peller used to belt out across the TV airwaves, "Where’s the beef?" in the Wendy’s ads. Well, today, almost 30 years later, my Sibes are barking out across the country asking, "Where’s the pumpkin?"  Pure pumpkin has become an important staple food in our Siberian Husky household. Gibson, my four-year-old, suffered several grand mal seizures a year-and-a-half ago, and has since been medicated for Canine Epilepsy with a combination of AEDs (anti-seizure drugs): Phenobarbital and Potassium Bromide, both have helped him in managing the seizures. Some side effects, however, include lethargy and weight gain. Both of which has affected him, especially the weight gain to the tune of 19 pounds! Yes, my big wooly boy tips the scales at 113 pounds. While he has good checkups from the vet and routine blood panels to monitor his meds, I am concerned with the weight gain for both his hind legs (which are just not long enough to handle the wei
14 comments
Read more
More posts