Showing posts from December 8, 2011
Show all

A Cry for Gordon: The Story of a Husky Saved 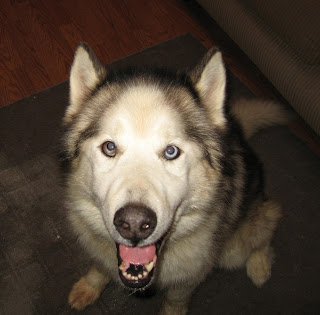 Smiling Gordon, now named "Kaiser." a Husky saved by a village!  Read his remarkable story below.     The holiday season is a time of miracles. Before Thanksgiving, in early November, writer Jeromie Williams with the Exainercom headlined a story that highlighted “Pet Pardons of the Day,” a story about an abused Siberian Husky whose silent plea for help was voiced by many and heard around the world. In an excerpt from the article, “The Pet Pardons organization released an urgent dog bulletin Wednesday asking the public for their help in finding a home for a five-year-old male Siberian Husky named Gordon who survived extreme abuse by his previous owner and dies tomorrow unless saved from Chicago Animal Care and Control.” The story tells of how Gordon suffered from “a fractured jaw, a broken canine tooth and a painful inflammation of the gumline that were parting gifts from the owners that abused him and   dumped him in a shelter to die.”   Posted photo of Gordo
15 comments
Read more
More posts