Flashback Friday #23: Oh, to Be A Counter Surfer Once Again! And...A Fond Farewell to a Fellow Epi-Dog FurFriend 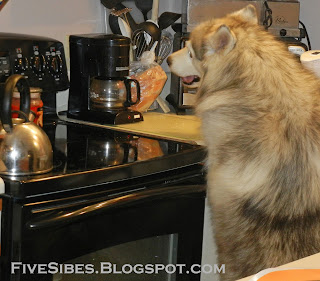 Today's Flashback Friday brings us to when Gibson was perfecting his counter surfing skills. Since he has been on Epi meds for three years, he had become quite lethargic and hadn't counter surfed in years. After a bout of Bromide toxicity, (which I previous wrote about) , his meds were reduced and it was as if my boy awoke to being three again! He became energetic, started running, and - of course - rediscovered the fine art of counter surfing! Typically, this sport is not condoned in the house, but seeing him being able to once again stand up on his hind legs just warmed my heart! Flash forward to today...and as many of you know, Gibson tore his cruciate ligament in his right leg and since he's an Epi-Husky, we've decided with our vet that we would go the Conservative Treatment route with him first before considering surgery. Part of that treatment, we learned about the Woundwear A-Trac Stability Brace/Harness from the hu-dad of our late furpal and fellow Epi-
5 comments
Read more
More posts