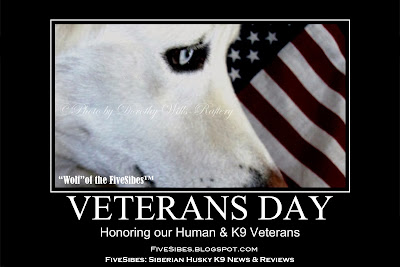 Today is Veterans Day. Let us all please take a moment to reflect upon all of our veterans, past and present, two-legged and four-legged, those who bravely defended our country, those who gave their lives, as well as those currently serving. If you see a veteran, remember to say "Thank You" for his/her service. Since this is a canine blog, we'll be focusing on the four-legged veterans and their dedication and service. And a great way to honor our military working dogs is to stop by a local shelter and make a donation of food, treats, goods, or money in the name of a K9 soldier. This year, 2014, marks a very special Veterans Day in the canine world as military canines became part of the New York Veterans Day Parade! An honor over due! According to ABC News, "New York's Veteran's Day parade a/k/a "America's Parade," honored all veterans, even the canine ones. For the first time in the parade's history, six military dogs
1 comment
Read more
More posts