Showing posts from September 6, 2012
Show all

Change is a Four-Letter Word to a Siberian Husky 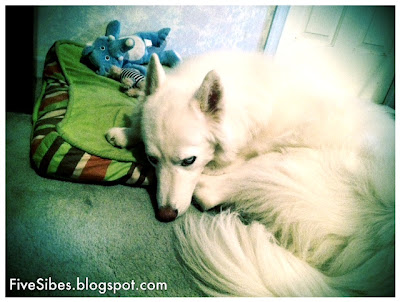 Oh my, the look says it all. Change. According to Dictionary.com, the definition of change is, " to make the form, nature , content, future course, etc., of (something) different from what it is or from what it would be if left alone."  According to my boy, Wolf, "change" is a four-letter word. And, well... apparently I did not get the "change" memo, or just chose to ignore it because I decided to do some early Autumn cleaning and rearranged my room, which included moving his bed. Mind you, I only moved it about five feet and it was to give him more room and get his bed away from the heating vent before the upcoming cooler season (I thought I'd get a head start). So my moving his bed really was to benefit him. But as you can see from his photo taken last night when he first went to bed (and discovered it had been moved), his look says he's pretty unhappy with me. Then, he proceeded to get up walk over the my nightsta
7 comments
Read more
More posts