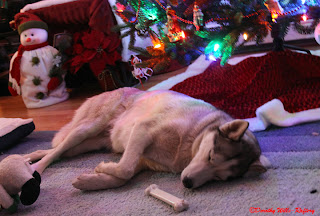 A Husky’s Night Before Christmas   my adaption of ‘Twas the Night Before Christmas by Clement Clarke Moore The night before Christmas all shared a warm vibe Not a creature was stirring, not even a Sibe;   The stockings were hung on the stair rail with care, In hopes that Santa Paws soon would be there;   The Huskies were nestled all snug in their beds, While visions of squeaky toys danced in their heads; With Harley on her blanket, and Gib on my lap,   Wolf, Chloe, and Bandit all settled down for a long winter's nap,   When out on the lawn there arose such a clatter, the FiveSibes wooed as to what was the matter.   Brothers Wolf and Gibson searched out cause, When who should appear – why yes, Santa Paws!   A bundle of toys he had flung on his back, And he left rawhides for all five in the pack. He spoke not a word, but went straight to his work, And filled all the stockings; then turned with a jerk,   And touching his finger to alpha Sibe’s nose,
15 comments
Read more

Trimming the Tree on Christmas Eve! 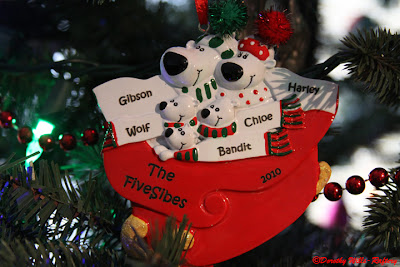 M erry Christmas Eve Day! Ornaments hold a special meaning to me, with many on our tree having a significant connection to the giver or for the receiver. There are many passed down from my mother to me, special ones given as gifts (see Toto with Dorothy from the Wizard of Oz? I like her name!), and the most special ones of all...the handcrafted ones my daughter made while in elementary school (see my all-time favorite ceramic Snoopy one she made). Also highlighting our tree are many canine ornaments, some whimsical and some reminiscent of our dogs, past and present. There are some that are still hung in memory of our late German Shepherd/Akita Chelsey, and many, many Siberian Husky ones; with a few more added this year!  W hen I was a child, my family trimmed the tree on Christmas Eve. My Dad would put up the lights and my Mom would even out the branches using black sewing thread. Then I could hang a few ornaments, but the rest we left for Santa Claus to do.  (My brother and sister we
6 comments
Read more
More posts