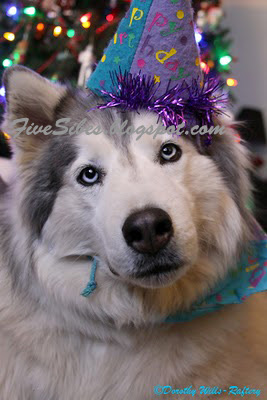 T oday is my Gibson's fifth birthday and he celebrated it in style with his Hu-family and his Sibe family! There were presents and singing and even his all-time-favorite...a bone-shaped all-natural vanilla ice cream cake! G ibson Les Paul of Mystic Mountain (yes, he was named after the guitar by my musician daughter!) joined our family in April of 2006 when he was almost four months old. After giving him his first bath, he slept on my lap the whole first night he was home. He is my very intuitive boy. He understands everything from a mere look to the spoken word. We have a very special bond.  H e is, has been, and always will be totally in love with my daughter's Sibe, our alpha queen Harley (since the day he came home and she beat him up)! They are inseparable. He is also a really good big brother to the three pupsters, his younger siblings, and the best canine companion I could ask for. When we first added the three pups to our family, I had a dog whisperer come to visit
21 comments
Read more
More posts