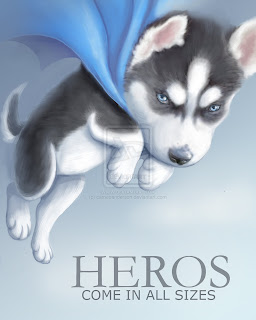 Artist rendering of Hero in fundraising poster. We all have favorite heroes. They may be human. They may be canine. Maybe they wear capes, maybe they don't. They can be real, or they can be fictional. In any case, sometimes even a Hero needs saving. And one sweet beautiful little Siberian Husky pup, named "Hero" needs our help.  Do you know the story of Hero, the Christmas pup? Just a few days after this past Christmas, a sweet little Siberian Husky puppy was left at a shelter in California. A rescue stepped in to save him and believes "This poor little baby was obviously someone's Christmas present only to find himself abandoned..."   The rescue folks at Alley's Rescued Siberian Angels discovered that the puppy was only about five weeks old, too young to have been taken away from it's mother, and was experiencing seizures...and even had one as the rescue was bringing him to the vet's office for an exam. An early Chip-In was set up to as
21 comments
Read more
More posts