A Bandit By Any Other Name is Still a Bandit 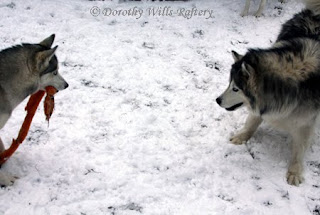 Shakespeare's Juliet asked,  "What's in a name?" Well, if you're one of our two-year-old triplet pups whose  name just happens to be Bandit, then there's a lot to the name! According to the dictionary, a bandit is a robber, an outlaw, a thief. Now considering our Bandit was given her name at just eight weeks old, there would be no way to know exactly what her personality would be like. In her case, it was destiny, fate, kizmet, whatever you would like to call it because in Bandit's world every single toy, scrap of fabric, bone, ball, even a rock--are all hers. She will gather them all, and in true bandito form, "steal" them all from the rest of her family, even if they were being played with. She will attempt to challenge even the alpha queen of the pack (who just stares her down then gives her a flip of the nose as if to say, "whatever.") She will then pile up all of her finds and perch herself atop them, like a chicken protecting her
8 comments
Read more
More posts