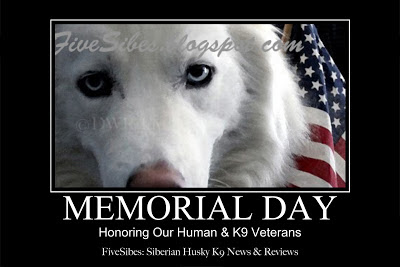 Wolf and all of us here at FiveSibes salute all our veterans. This is Memorial Day weekend here in the United States, and we' d like to share this beautiful tribute to the Military Working Dogs and their Handlers:  Since World War I, canines have played a large part in history. Known as "war dogs," these courageous canines, accompanied by their handlers, have bravely assisted our soldiers in so many ways; from tracking to bomb sniffing. For more interesting facts, videos, documentaries, stamp project information, and much more on the war dogs, visit the United States War Dog Association's website .   War Dog Ambassador "Buck" Since we are all about the Siberian Husky, did you know that they were one of the original seven breeds of dogs used as a War Dog during World War II? And beautiful "Buck ," while not a War Dog himself, he served as the U.S. War Dog Am bassador journeying thou sands of miles with his handler,
8 comments
Read more
More posts