Beware of Change: How a Capsule Compound Change Resulted in Bromide Toxicity 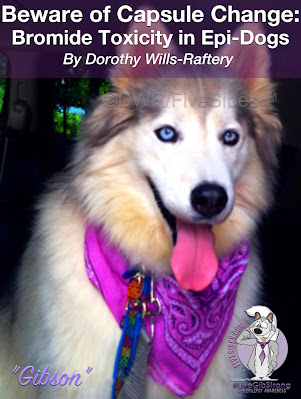 After three-and-a-half years of having things pretty steady with my Epi-Husky Gibson, I've just recently had a bit of a scare. First, let me start by saying, Gibson is doing much better now. I decided to wait to post about his ordeal until after his bloodwork came back and I had a full report to post. Flashback a little more than three weeks ago. It had been time to refill Gibson’s Potassium Bromide (KBr) prescription, which is one of the meds’combination he is taking for Canine Epilepsy. (He is also on Phenobarbital, and also Thyrotabs as his thyroid became an issue, too, which is not an uncommon link for canines with seizures).  The 300 mg KBr Capsules When I picked up his prescription from my vet, the 1,000 mg capsules were the same, but I noticed that the 300 mg capsules were smaller in size (as you can see from this photo, they are more than half the size of the original) and had more of a crystallized appearance as opposed to the more powder-like material in the
19 comments
Read more
More posts