As National Police Week Comes to a Close, the K9 Officer is Honored 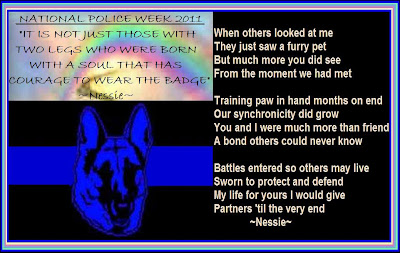 This week has been a very special week as it was National Police Week, a time for thanking and honoring all members of the police, including the K9 officers. The beautiful tribute to K9 partners pictured here is a creation of Nessie as posted on the Law Enforcement Today Facebook page. The dedication, love, and hard work exhibited by the canine cops each and every day are just amazing. A loyal partner and dedicated officer of the law indeed. Below is a great documentary, Freedog , highlighting the special bond between police dog and handler by filmaker Stephanie Tabor. FREEDOG from Stephanie Tabor on Vimeo . And a round of "a-paws" and thanks also goes out to the Siberian Husky Canine Police Dogs of the Canadian Mounted Police. In the late 1800s, the Canadian Mounted Police used Huskies and Malamutes to conduct their long winter patrols in the North Country, and later in the Arctic regions. By 1898, the police had over 100 dogs. It is written that the Husky dog
19 comments
Read more
More posts