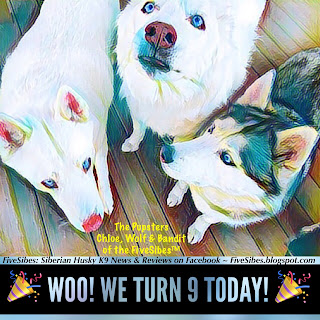 Surrogate Momma Harley joins in for some nom-noms! What a party it was! Check it out... Gibson once again stopped in from The Rainbow Bridge to visit his  younger siblings for their birthday!  ~Once FiveSibes: Always FiveSibes~ Since I'm posting at the end of the day Thursday on the Pupsters Birthday, I'm tying it in with our Flashback Friday!  In addition to the Pupster's flashback photo from 2008 when they were just mere pups, here's another special Flashback Friday photo from four years ago of all FiveSibes, including big brother furangel Gibson, enjoying the best part of the day...cake time...at the Pupster's 5th Birthday party! Flashback Fridays are brought to you by us - the FiveSibes - and now also our co-hosts, Love is being owned by a Husky each Friday. We hope you'll find a photo or video from Memory Lane, post it, and link up to our blog hop each week! If you don't catch it on
4 comments
Read more
More posts