A Wooly Pup Before the Pup Went Wooly: Fast Facts About Husky Fur on a Flashback Friday 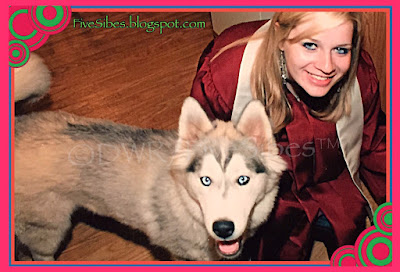 Did Gibson always looks so fluffy?  In a word, no! In this photo of Gibson pictured above with my daughter at her graduation - which flashes back to 2006, when Gib was just a pup of six months with his short summer puppy coat, there was no hint of the big, almost 100-pound super fluffy wooly boy he would grow into! Aren't Husky coats just amazing? Here's some fun fast facts about a Siberian Husky's coat (traditional and wooly): 1) Blowin' in the Wind. They blow their undercoats out twice a year. And if you've ever seen the snow furries from a shedding Husky, you know just how major of an event this is - there's so much fur that you can make a life-size fur model from the shedding hair! The good news is that when they are not shedding, they really don't shed! I have a blue cordouroy couch to prove it! (However, with five Huskies, one is always at a point of shedding, meaning some Husky is shedding at some point year round here!) And the warmer the temp
8 comments
Read more
More posts