Saying Goodbye to Daniel Anker, Producer of Icebound - the Movie About the Rich History of Alaska, Sled Dogs, and the 1925 Serum Run 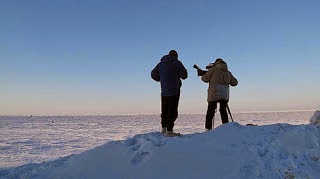 Icebound Trailer from API FILMS on Vimeo . I was very sad to learn of the April 21st passing of Daniel Anker, a great filmmaker and producer, and someone I had the privilege of interviewing and getting to know a bit over the recent years as he kept me up to date on a very special movie project of his , Icebound , the documentary movie about the 1925 Serum Run in Alaska, featuring survivors and narrated by actor Sir Patrick Stewart.  Production still courtesy of Icebound. It's taken me pretty much the better part of this week to think about how I wanted to say "goodbye" and pay tribute to this talented man, an award-winning documentarian (including an Academy Award nod), and creative visionary I was lucky enough to have been able to get to know through our love of sled dogs, history, writing, and film. When the message came in from my "The Sibe Vibe " co-host and producer, Robert Forto, telling me of Daniel's passing, I was just stunned. Daniel was
2 comments
Read more
More posts