Showing posts from December, 2011
Show all

Christmas Card Exchange Was So Much Fun! 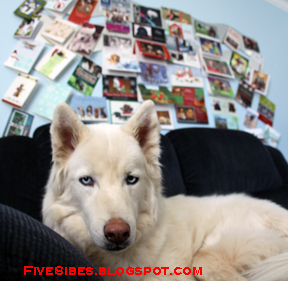 Wolf below our wall of furpals' greetings! Wow! We have had so much fun with participating in the Blogville Christmas Card Exchange! This was our first time joining and I have to say, getting all those great holiday cards made the season even brighter and I loved getting to know each of you a little bit better through your lovely photos, cards, notes, and Email greetings!  Here is how our story goes... Gibson was excited to see all the cards arrive! Each card was so beautiful! Harley loved seeing her furpals! Chloe loved seeing all the cute designs!  Harley was excited to start displaying them! Bandit loved looking up at all the greetings! Wolf & Bandit: "Woo! These are all for us!" Chloe drifted off to sleep dreaming of her furpals! Our wall of beautiful cards from our wonderful Blogville furpals!   We love our cards! Thank you, everyone! A giant round of a-paws and a million thanks to our Blogville's Christmas Card Exchange coordinato
19 comments
Read more

A Sibe Sleeping in Heavenly Peace on a Silent Christmas Night 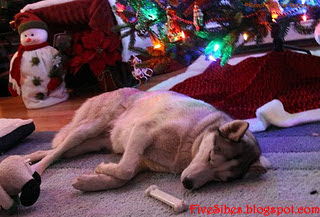 Merry Christmas! It's Time for a Sleigh Ride! 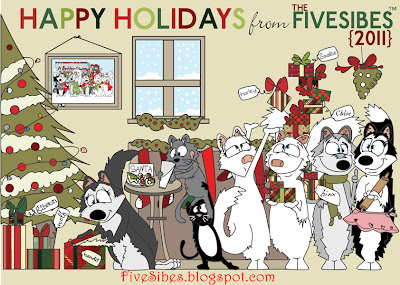 Merry Christmas to all of our furpals and their hu-families! We wish you all the merriest the season has to offer and the brightest of new years. While we reflect back on this year, let's all celebrate how lucky we are to have our furbabies in our lives. Let us also take a few moments to remember the many furpals who are now celebrating Christmas in the big, beautiful snowy meadow beyond the Rainbow Bridge, and those who are homeless. May animals everywhere get their wish this Christmas for a warm place to sleep, bowls filled with food, and hugs by humans whose hearts are filled with love. We are all so fortunate to have forged wonderful, caring relationships here in our pet community.  Thank you to all who joined in our Christmas Canines & Friends Sleigh Ride! The FiveSibes and I had so much fun putting our sleigh ride together and meeting so many gorgeous furbabies from across the globe! So after the presents have been opened, gather your hu- and furfamily around and enj
27 comments
Read more 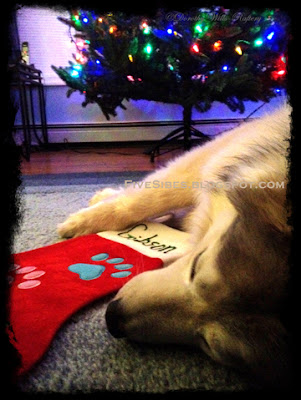 Gibson, all snug on the rug with his stocking. A Husky’s Night Before Christmas FiveSibesMom's adaptation of ‘Twas the Night Before Christmas   by Clement Clarke Moore The night before Christmas all shared a warm vibe   Not a creature was stirring, not even a Sibe;   The stockings were hung on the stair rail with care, In hopes that Santa Paws soon would be there. The Huskies were nestled all snug in their beds, While visions of squeaky toys danced in their heads; With Harley on her blanket, and Gib on my lap, Wolf, Chloe, and Bandit all settled down   for a long winter's nap.   When out on the lawn there arose such a clatter, the FiveSibes wooed as to what was the matter.  Brothers Wolf and Gibson searched out the cause,   When who should appear – why yes, Santa Paws! Santa Kathleen from our vet's office!   A bundle of toys he had flung on his back, And he left rawhides for all five in the pack. He spoke not a word, but went straight to
18 comments
Read more 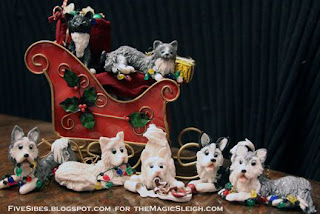 Each year, I love to add new ornaments to my collection on our tree. Each ornament, some hand-crafted from my daughter as a child, some passed down from my youth, some representing a special moment in our lives, and then there are my pet-themed ornaments. This year, I ordered custom designed porcelain ornaments of each of our Sibes, as well as our kitties Smokie and Binx. The awesome creations were done by fellow blogger, The Magic Sleigh.   I also added a cute little penguin family (last year it was a polar bear family) to our tree this year representing each member of  our Husky family. What type of ornaments do you put on your tree? Do you have favorite ones? Ones that hold special meaning? I'd love to hear about them! Here is a little slideshow of some of our pet-themed ornaments. Hope you enjoy it! And Happy Tree Trimming to you and yours!   Music by Kenny G.
9 comments
Read more

It's the Christmas Edition of Regressive Dinner for Pets! 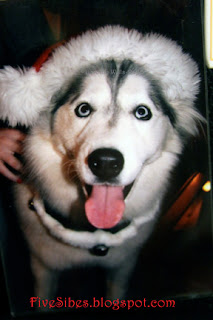 Gibson is eager for the sweet potato chews! Christmas is almost here and with it comes the aroma of all things delicious! Today is the Christmas edition of the Regressvie Dinner for Pets blog hop hosted by Two Little Cavaliers . It's a different sort of blog hop without a Linkys, but please be sure to check out Two Little Cavaliers page for the list of particpants and check out their yummy recipes too!   This edition focuses on Soups, Salads, and Sides. We chose to reprint a recipe from Food.com for Sweet Potato Chews for Dogs ! Our Huskies love anything sweet potato, and this is a wholesome, low-calorie, healthy treat for them. Whip up a batch for them this Christmas and see how happy they will be! Directions: Preheat oven to 250°F. Wash the sweet potato or yam (the very orange type). Cut down the middle lengthwise. Then cut long lengthwise slices about 1/3 of an inch wide and place on a cookie sheet in a single layer. Bake in oven at 250 F for about 3 hours
7 comments
Read more 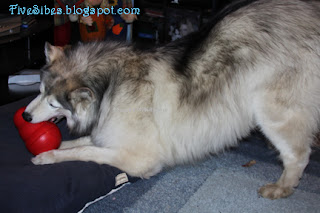 Gibson having fun with the Kong® Wobbler! Well, Christmas is almost here...and you can feel the excitement in the air! The Huskies sense something wondrous is about to arrive. Their eyes have been big and bright and there is extra energy in their steps! Each time we enter a room or go outside with them, it's like they are waiting for "it." Hopping, jumping, wooing, kissing, all in a group Sibe-family effort to get at "it." Whatever "it" is! Well, "it" is the excitement of Christmas almost upon us! I think they know a huge box stuffed with Santa Paws' gifts for them has arrived ahead of the sleigh and is parked in our family room. (Santa just can't carry all the goodies on his sleigh, so the furry elves in the North Pole sent it on ahead!)  Chloe enjoying her "Classic" Kong© I have to admit, I just love setting up their stockings, checking out new toys that they would love (and hopefully stand the tough testing of a
14 comments
Read more

Newsy Tuesday! Coffee with a Canine Interview! And Part II to the Social Media for Social Good Pet Event 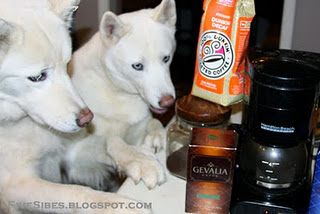 "Woo! Hey, Mom, what flavor coffee are you brewing today?" It's another Newsy Tuesday and today we want to send out our sincere woos and thank yous to Marshal Zeringue who writes the Coffee with a Canine blog for inviting the FiveSibes™ and I in for a coffee break and chat that was posted last Monday! Stop over to say "hi" and check out all the great folks and their pets featured on Coffee with a Canine and let them know we sent you! Oh, and don't forget to bring your mug with you! * * * * * * * * * * * * * * * * * * * This is also Part II to the Social Media for Social Good: A Holiday Event for Pets hosted by Two Little Cavaliers and Pamper Yourself in Pink , where you can win $213 cash prize for a pet charity of your choice AND receive $112 cash prize for yourself via PayPal. Today, it's the rafflecopter for following Twitter folks! And remember, this pawsome holiday event runs through until December 28th, so spread the word to all of you
8 comments
Read more 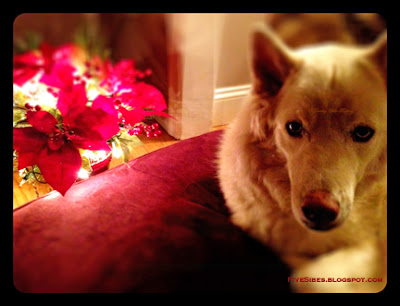 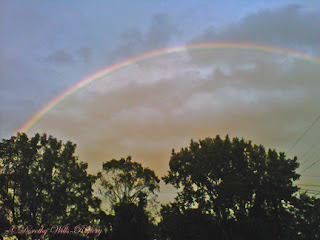 Earlier this week, I thought I'd prepare some posts ahead of time for the week as the time for holiday hustle and bustle increases...and then there was news of a loss of a furfriend...and then another...and then unbelievably and shockingly so, today I've learned of one family's devastating loss. Add this to the recent passing of some other petpals, it's very difficult to shake the sadness when the news hits. It envelopes us like an ill-fitting coat. I believe the pet world is a close knit, caring, and compassionate world. When one of us hurts, we all hurt. And today, we are all hurting. There is no "good" time to lose a pet. And having such a terrible loss around the holiday season just seems to magnify the pain. It's certainly been a sad week of loss in the pet social media world. Through social networking, as we have all discussed before, we have forged some lasting relationships with other pet parents - sharing the tribulations, trials, joys, and sorr
17 comments
Read more

Dreaming of a White Christmas 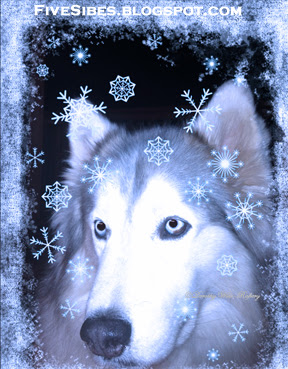 Gibson is dreaming of a White Christmas... will we have snow???
3 comments
Read more

Ring in the New Year with $213 for Your Pet Charity of Choice AND $112 for Yourself!

Chloe, the ReinHusky Waits for Santa on a Wordless Wednesday 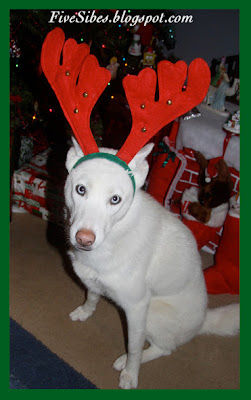 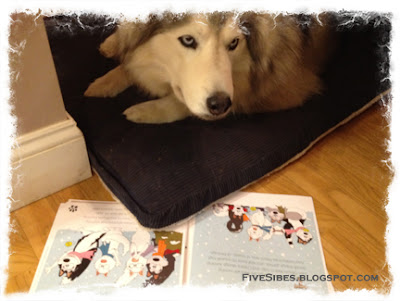 Gibson proofing a draft of the children's book about him! It's an exciting Newsy Tuesday here! I just finished editing a draft of the first book in my children's series of FiveSibes™ Tales (illustrated by the talented Michelle Littler ) , What's Wrong With Gibson? Learning About K-9 Epilepsy ! Gibson helped proof the draft and check that everything was A-OK before sending it back to the printer for final edits. If you are interested in getting a copy, they can be pre-ordered at a discount at ArcticHouse Publishing . And we'll be happy to do any personalizations, just note it in the "comment" section of the order form! And just a reminder that a percentage of proceeds from the book (post expenses) will be donated to the non-profit organization, Canine Epilepsy Resources , to help with their continued support and information for parents of Epi-dogs worldwide. As you know, this is a cause that is very near and dear to my heart, with my Epi-dog Gibson bein
14 comments
Read more 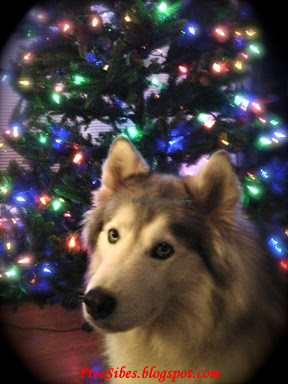 A Christmas Package of Care for our K9 Soldiers & Handlers 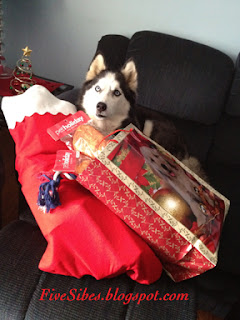 Harley with the Troops' gifts. Chloe with the goods!   Okay, so the song really goes, "...greeting cards have all been sent..." and to be honest, that's not quite true here. My stacks of cards are sitting on my dining room table all ready t o be written and sent...soon... BUT , our packages and cards for the military K9 handlers and their K9 soldiers stationed in Kabul, Afghanistan has indeed been sent! Wooo-hooo!  Arwen's Pack was so awesome this season by thinking about our troops and the dedicated K9 soldiers stationed overseas, that they sponsored a care gift package drive that we participated in. " These men and women, far from home and family, need all the support we can offer," said Arwen's Pack hu-mom in a blog post. "They're risking their lives each day, while caring for and working with their dogs, just hoping to make it back to their families intact.  Please consider them while shopping over the next week.  Along wit
8 comments
Read more
More posts