Feelin' Free on a Flashback Friday! And Welcoming Aboard Our New Hop Co-Host! 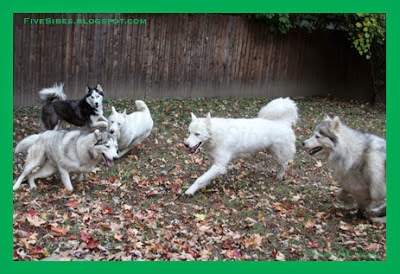 Just recently, my heart swelled with joy to see 20 paws back on the ground at the same time. The last time all FiveSibes were running together freely like in the above flashback photo was the summer of 2012 before our Chloe blew out both her legs due to CCL and meniscus deformities her vets and we suspect she had since birth due to poor genetics. As many of you know, her brother Wolf underwent the same imbrication surgeries - twice - as both of his over the course of a year also blew out. And big brother Gibson, who diagnosed with Canine Epilepsy at age three and has lived with hind end weakness as a side effect to his medication, had a bad fall on the ice during a sudden snow storm last Christmas Eve that caused him to become lame. I had been rehabbing him since, and he is now miraculously walking brief distances on his own! So to once again see them "20 paws on the ground" is indeed a joy. While I know they will now not be able to all run wild and carefree again like in
5 comments
Read more
More posts