My FiveSibes and I are pretty excited about a new movie that coming out. I initially  hard about "Max" from my daughter. Having been both been long-time fans of actress Lauren Graham and the Gilmore Girls TV series, and knowing my affinity for all things canine, combined with my interest and previous articles on Military Working Dogs (MWD), my daughter sent me a trailer for the movie. I knew immediately this was a movie I wanted to see. Fast forward a week and here I am quite thrilled to be sharing details of what promises to be a classic movie! "Max" is a family action-adventure movie from Warner Bros. Pictures and Metro-Goldwyn-Mayer Pictures from writer/director Boaz Yakin (“Remember the Titans,” “Now You See Me”).


The official synopsis of the movie is:


"'Max" is a precision trained military dog who serves on the frontlines in Afghanistan alongside his handler, U.S. Marine Kyle Wincott. But when things go terribly wrong on maneuvers, Kyle is mortally wounded and Max, traumatized by the loss of his best friend, is unable to remain in service.

Shipped stateside, the only human he seems willing to connect with is Kyle’s teenage brother, Justin, so Max is adopted by Kyle’s family, essentially saving his life. But Justin has issues of his own...and he isn’t interested in taking responsibility for his brother’s troubled dog.

However, Max may be Justin’s only chance to discover what really happened to his brother that day on the front, and with the help of a tough-talking young teen, Carmen, who has a way with dogs, Justin begins to appreciate his canine companion. 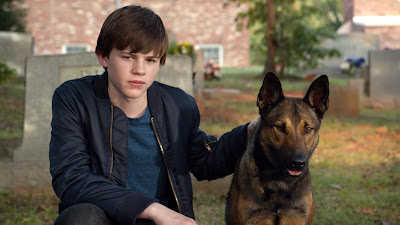 Justin’s growing trust in Max helps the four-legged veteran revert back to his heroic self, and as the pair race against time to unravel the mystery, they find more excitement—and danger—than they bargained for. But they each might also find an unlikely new best friend…in each other."


I admit, while watching the movie trailer, I reached for the tissue box and immediately put Max on my "Must Watch" list and after you watch the trailer, I know you'll want to see it to!